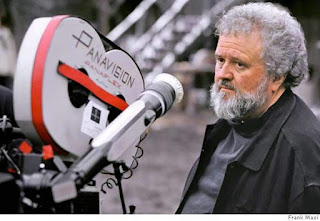 High in the list of happy encounters I have enjoyed over the years with filmmakers was my first meeting with cinematographer Allen Daviau. The occasion was the New York premiere in 1985 of Steven Spielberg’s The Color Purple, for which Daviau was the cinematographer. While everyone was scrambling for interviews with Mr. Spielberg, I had the good fortune to meet the burly, congenial, and bewhiskered Daviau in a New York watering hole for the first of what would be two conversations. The second, which transpired in Hollywood in 2010, constituted an update of the first. Both are published in my book, THOSE WHO MADE IT. In the five decades of his astonishing career, Daviau has earned Five Oscar nominations, two American Society of Cinematographers (ASC) Awards, an Art Directors Guild’s Distinguished Career Award, and a Lifetime Achievement Award from the ASC.

In our first conversation, from 1985, the 43-year old Daviau spoke of his long involvement with Steven Spielberg, which began with the short film, Amblin, and continued through The Color Purple. In the 2010 conversation, he talked about his subsequent work on Spielberg’s Empire of the Sun and his work with other directors, notably, John Schlesinger’s The Falcon and the Snowman. He also comments on his subsequent years in and outside of the industry.

In both interviews he paid tribute to the many Hollywood camera persons and operators of his generation. I can still hear, amidst the clatter of coffee cups and the hum of background voices, Daviau’s compelling voice, gruff and gentle, by turns, the words tumbling out with vehemence and conviction.
Posted by John C. Tibbetts at 9:14 AM