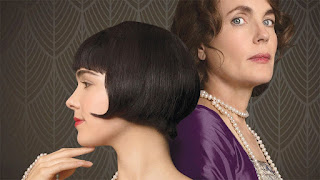 Directed by Michael Engler and starring Haley Lu Richardson as Louise Brooks and Elizabeth McGovern as Norma. Adapted by Julian Fellowes from the novel by Laura Moriarty.

It tells us a lot about actress Louise Brooks that her sharply acerbic Lulu in Hollywood, published in 1982, three years before her death, contains a chapter entitled, “Why I Will Never Write My Memoirs.” Apparently, even she had difficulty facing up to the scandal-ridden career that had blazed so brightly in the late 1920s and early 1930s, yet faded just as quickly, leaving her in relative obscurity for the last forty years of her life.

In his interview with her, published in the estimable The Parade’s Gone By (1968), historian Kevin Brownlow found in the reclusive Brooks “a woman of immense creative energy, “ a “brilliant writer,” and someone “completely honest about herself” and “not afflicted with morbid nostalgia.” Born in Cherryvale, Kansas in 1906, she moved with her family to Wichita, from whence she pursued a career in dancing in New York before making her first films in the mid-1920s in Hollywood. Her career really took off in Germany, under the mentorship of the formidable G.W. Pabst (Pandora’s Box and Diary of a Lost Girl, 1928-1929). From then on, her career stumbled; and after making a few B-westerns back in Hollywood, she returned in 1938 to the family home in Wichita where she taught dance while hiding away from Hollywood. Her last years were spent in Rochester, New York, where her Memoirs spurred a new-found fame and cult status.

All of which, ironically, is almost irrelevant to Laura Moriarty’s 2012 novel and Julian Fellowes/ Michael Engler’s 2019 film adaptation. Based on a thin layer of historical fact, Norma (Elizabeth McGovern) is the middle-aged Wichita housewife who chaperones lively 15-year old Louise (Haley Lu Richardson) on her trip to New York to audition for the famed dance company of Ruth St. Denis and Ted Shawn (“Denishawn”). Once ensconced in their New York walkup, Norma and Louise are a study in contrasts as they pursue diverging paths: Norma, a quiet and slightly tight-laced matron, seeks from an orphanage the truth of her past. Louise, a budding ingenue, sports her signature bobbed hair-do as she marches briskly into the future with the Denishawn Dance Company. Norma finds an unexpected new friend in the handyman of the orphanage. Louise enjoys the attentions of a new boyfriend and, by no means incidentally, curries favor in the eyes of dance master Ted Shawn.

The story concludes in 1922, years before Brooks’s entrance into the movies. Norma returns to Wichita, her new lover in tow, to confront her startled husband. Louise goes on the road with the Denishawn company, new worlds of her own to conquer. Only a brief Epilogue serves up a few glimpses of the later years of both women. Big mistake. This token nod to later history—complete with unconvincing wigs and makeup—should have been omitted entirely and the story of the relationship between the two women, so different in age and temperament, allowed to remain on its own. And yes, a few token images from Pandora’s Box play out against the closing credits. Better to have left them out, too. Without context and limited to a few scant seconds, they fail to convey anything of Brooks’s sensuous allure.

Given the presence of a lively character like Brooks, and compared to the pagan, hedonism she brought to the screen, The Chaperone is a surprisingly mild affair. Excepting a few scenes of a wild party with Louise’s new boyfriend and her revelations to a startled Norma about her not-so-proper lifestyle, there is little else to hint at the spectacular rise and fall to come. Haley Lu Richardson is fetching and conveys at least some of Brooks’s charisma. Her dance scenes, in particular—including a wonderful recreation of one of Denishawn’s signature dance programs—are highlights. But the palm goes to the superb Elizabeth McGovern, who has worked before with scenarist Julian Fellowes and director Engler on the Downtown Abbey series. Her every scene shows textbook restraint and subtle eloquence. A real standout is her brief reunion with her birth mother (Blythe Danner). We sit back, savoring these two pros in action, as they test each other’s mettle, their mutual discovery ending in quiet recriminations and heartbreak. It alone is worth the price of admission. The fine supporting cast includes Campbell Scott as Louise’s father, Miranda Otto as Ruth St. Denis, and, of course, Blythe Danner. I should also mention Geza Rohrig, a handyman at the orphanage, who brings a nicely muted quality to his turn as Norma’s new love.

By the way, Louise Brooks wasn’t the only screen entertainer to come from that corner of southeast Kansas—Cherryvale, Parsons, Iola, and Independence—that also produced, respectively, Vivian Vance, ZaSu Pitts, Buster Keaton, and Martin and Osa Johnson. They all were born within the years 1894-1906 and none of them remained for long in their home towns. But they all have been honored ever since with annual celebrations back home. I had the privilege of being involved in all of them as an organizer. And I can attest to the fact that screenings of Brooks’s Beggars of Life and Pandora’s Box still astonished those who attended the Parsons events. Happily, once lost, they are now available in new restorations for today’s home viewing.
Posted by John C. Tibbetts at 5:10 PM No comments: