WHAT’S IN A NAME? 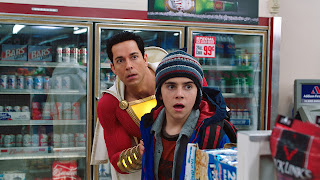 The only reason I went to see SHAZAM recently was my misguided loyalty to the original Captain Marvel character. Sadly, that concept from the C.C. Beck/ Bill Parker 1939 original has been so mangled and misnamed over the years that the original, disabled newsboy Billy Batson and his super alter-ego, Captain Marvel, seems now lost forever. Instead, we’ve recently had something called CAPTAIN MARVEL, which bore no resemblance to the original but appropriated the name. But wait—(as they say), this super hero was a woman who is never actually named “Captain Marvel,” but who instead has a boss named “Mar-Vell.” Whaaa?

And now in SHAZAM, we have a young boy named Billy Batson, but his super alter-ego has been stripped of the name “Captain Marvel” and instead dubbed “Shazam.” I cry, “Foul!!!!” The inescapable association these days with clunky Gomer Pyle is hard to abandon. Moreover, “Shazam” is not his only name here, but the infinitely better sobriquet, “Captain Sparklefingers,” is applied at times. Somehow, that last seems just fine.

But really, can’t we make up our minds about this particular superhero? The name-game, not to mention the gender issue, has gotten out of whack.

But why do I complain? Am I not the guy who fairly trembled with pleasure upon encountering the many names of J. R. R. Tolkien’s immortal hero from Lord of the Rings—“Aragorn”... sometimes named “Ranger”... sometimes named “Elfstone... sometimes named “Strider.” I mean, how cool was the guy’s full name—Aragorn II, Son of Arathorn, Elessar Telcontar! Magisterial, regal, swashbuckling, by turns.

So I maybe I should be a little more forgiving about the confusing name-game surrounding the superhero once named, simply, “Captain Marvel.”

As for the movie, SHAZAM, I won’t even try to untangle the writhing tentacles of the plot. Except to note that the appearance here of the muscle-bound “Captain Sparklefingers” uncomfortably resembles a Mad Magazine classic spoof of Superman and Captain Marvel that appeared in the mid-1950s. Those with fond memories of that great satire, drawn by the immortal Wally Wood, will recall that “Superduperman” clashed with “Captain Marbles.” And the image of Captain Marble’s overstuffed muscular upholstery was really funny. But the sight of the bizarrely-padded “Captain Sparklefingers” should have stayed in a comic book. Here, on screen, he is merely ridiculous.