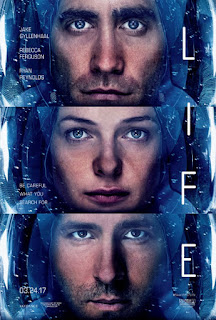 Those warnings to “Watch the Skies!” may be too late. In a breathlessly nihilistic ending, the ship’s capsule containing the creature splashes down in the ocean; and several ships are seen approaching it from the point of view of a high-angle shot. It’s as if we are viewing through a microscope the encounter, which is nothing less than the fertilization of an egg... and the birth of the End of the world.
Posted by John C. Tibbetts at 8:28 AM No comments:

GET OUT: AN AMERICAN GOTHIC 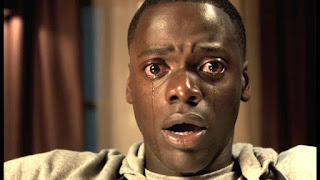 SPOILERS ALERT! The most interesting film of the new year is this serio-comic parable about race in America. It’s an amazing directorial debut from a man known primarily as a comedian. A weird cauldron of subtle creeps and outright guignol horror, it comes across as a kind of racist STEPFORD WIVES and true-life GUESS WHO’S COMING TO DINNER. Sprinkle in a few shock cuts, some quirky slapstick, and an unexpected tribute to the Transport Security Administration (!). And yes, the great Catherine Keener is here, the evil matriarch of a family straight out of a Grant Wood painting in a crooked frame. (She first showed us how purely evil she can be as the suburban housewife who holds a young girl hostage in AN AMERICAN CRIME.)

On their way to the Armitage family home, tucked away in rural Alabama, Chris and Rose are your ideal interracial couple, comfortable in their black and white skins and committed to each other. Any apprehensions Chris might have about being accepted by Rose’s upscale whitebread family are quickly erased at the ease with which he is accepted into the family circle. . . Until. . . He begins to notice things. Several black servants appear, smiling, rather vacant. They wander about the house and grounds like vagrant ghosts. Stray dinner table remarks seem subtly racist; a few visiting relatives seem to be sizing him up (like that odd remark about his “genetic physical gifts”); and a strangely unnerving undercurrent flows through the house. Like all self-respecting gothic houses, there’s that locked door to the basement rooms.

And there’s Missy, the matriarch, a practicing therapist whose specialty is hypnotism. She loses no time in locking eyeballs with him and, with a slow twirl of a spoon in the coffee cup, puts him under. I mean, puts him UNDER. A nightmarish image shows him falling, falling, into a dark pit. He moves about, only half awake, shifting between conscious and unconscious states.

Her hypnotic influence is everywhere. This house is a modern-day plantation, a pressure cooker of tensions in liberal White America. This is the crux of the film: Racial sympathies are only skin deep (as it were) and bigoted cruelties are only lying in wait. The first revelations of this come when the click of Chris’s camera momentarily releases the tortured slave identity that lurks beneath the servants’ placid exterior. And so the time comes when all the masks are off and Chris’s beloved Rose and her family are revealed as rapacious slave masters. Rose, in particular, like other family members, has been “recruiting” young black men for sex all along, and then consigning them to some unknown fate (are some of them now the sleepwalking servants?). Chris is the newest. The whole household has been collecting these black folks for a variety of purposes, as servants, sex slaves, even as subjects for some sort of surgical brain procedures and mysterious medical experiments—a sort of medical miscegenation with the white folks. At this point, late in the film, the action in the underground laboratory explodes in an all-out guignol of mad scientists and hideous surgical experiments.

Now entrapped in that locked basement room, Christ manages to get free and exit the house, killing Missy and other family members. He’s out on the highway speeding away—until Rose appears, shotgun in hand, ready to mow him down. But at the last minute, Chris’s buddy, whom we met earlier in the film working in the Transport Security Administration, comes to the rescue. Despite his broadly humorous antics, the tone of the film is not damaged, but, curiously enough, enhanced.

The most haunting images in the film are the smiling, placid faces of the black housekeeper and farm hand, the epitome of those “happy black folks” working for the Massa. “I told you not to go into that house,” says Chris’s TSA friend (LilRel Howery). Indeed, if you venture into what seems the possibilities of racial equality and harmony—you do so at your risk.
Posted by John C. Tibbetts at 8:19 AM No comments: