The two weeks I spent traveling with Mary Lou Pagano in the county of Kauai, Hawaii, June 2015, amply confirmed Kauai’s reputation as the home of Hollywood exotica, from the JURASSIC PARK films to Cameron Crowe’s new Hawaiian love letter, ALOHA. I spend a day in Lihue in the offices of the Kauai Film Commission (http://www.filmKauai.com, pictured here... 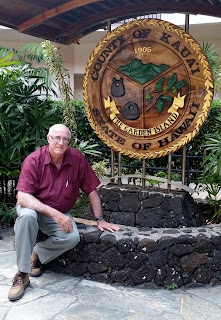 “You can find the whole world on this tropical island,” is the Commission’s official mantra. Available for interviews were two Film commissioners. Art Umezu (pictured below), has been with the Commission for several decades, since coming to the island from his native Japan (note the toy dinosaur on the table before him!).. . . 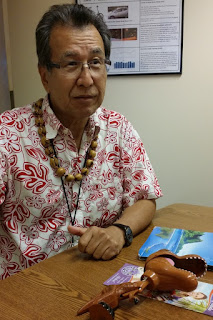 And Randall Francisco (pictured below), who came here from the Philippines, is the new kid on the block, taking over many of the chores from his mentor, Art Umezu. At the moment, Randy is preparing for his first Commission field trip, to Washington, D.C., for a meeting with the Hawaiian congressional delegation. Of course, on the agenda is the world premiere screening of the new JURASSIC WORLD movie. 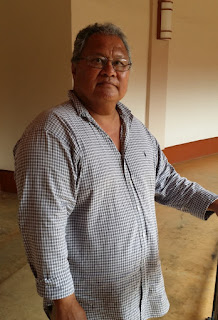 Our conversations included the ongoing concern of the Commission to preserve the ecological integrity of the island in the face of the incursions of film studios and crews. Indeed, Kauai has served as Hollywood’s tropical “back lot” since WHITE HEAT was first filmed here in 1933. Included among the dozens and dozens of subsequent films and television shows are BLUE HAWAII, BIRD OF PARADISE, DONOVAN’S REEF, THE TIME MACHINE, THE DESCENDENTS, and GILLIGAN’S ISLAND. (Recommended is The Kauai Movie Book (1996), a 128-page coffee table book produced by the Wilcox Hospital Foundation with assistance from the Kauai Film Commission and written by Chris Cook and photographed by David Boynton). You can’t argue that preserving the pristine conditions of, for example, these amazing beaches, is a high priority for everyone. No painting by the British watercolor master, J.M.W. Turner, can rival this... 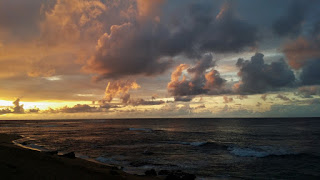 Another priority of the Film Commission is encouraging subject matter that accurately reflects the contemporary cultural and social activities of the island. Not all the movies shot here can expect to be spectacular adventure blockbusters like KING KONG and PIRATES OF THE CARIBBEAN: ON STRANGER TIDES, the latter of which was shot in the National Tropical Botanical Gardens, Lawai, pictured below. Ironically, the diverse landscapes in Kauai have also been “stand-ins” for Central and South America, Africa, Australia, Southeast Asia, and the South Pacific. Makana Ridge, for example, often serves for Tahiti; and the Hanalei Valley for Southeast Asia. Other movies shot here, like AVATAR, suggests other worlds, entirely! 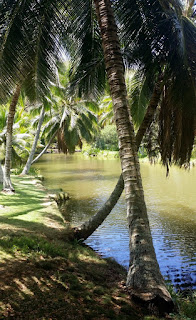 Meanwhile, our headquarters in Haena were just a short walk to Tunnels Beach, one of the most scenically beautiful on the island. 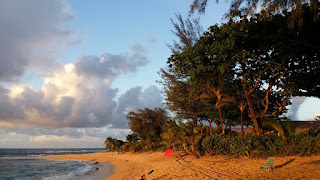 From here a drive around the island takes just a matter of a few hours. Pictured below, for example, you can see behind me the fabled NA PALI cliffs, a spectacular coastline of sheer cliffs rising thousands of feet above the Pacific. These rock formations, waterfalls, and caves, accessible only by water, have been featured in countless movies, including the Harrison Ford vehicle SIX DAYS SEVEN NIGHTS. Our Blue Dolphin boat tour along the coast lasted more than five hours, concluding with a return sail directly into the setting sun of Port Allen. 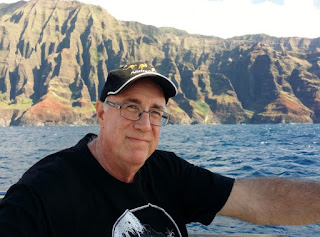 And everywhere the spectacular sunsets and cloud formations crowned the adventures of our two weeks... 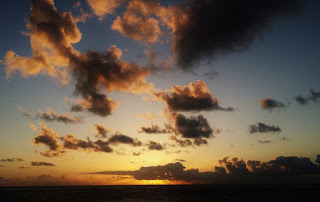 Indeed, the beaches at twilight cast a haunting spell of muted flame and shadow... 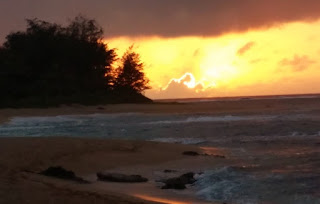 Closer at hand are the floral displays, like these dazzling orchids... 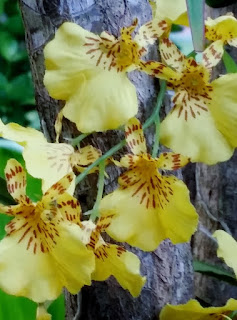 And one has to pause frequently along the winding roads to take in breathtaking vistas like this... 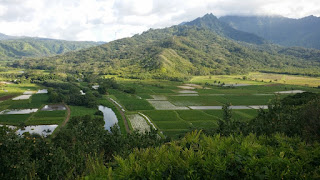 Not to be outdone, the lavish resort area of Princeville boasts golf courses, restaurants, and hotels. Mary Lou stands beside one of the many spectacular flower gardens in the area. 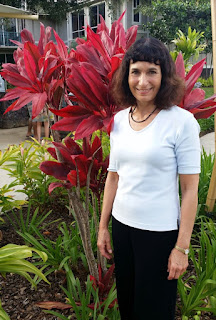 Of course, chief among the movie-related topics we encountered everywhere was the impending premiere of JURASSIC WORLD, the new Steven Spielberg epic, which has already garnered top box office figures in its first two weeks. One popular newspaper, The Garden Island, dated 12 June 2015, boasted an invite-only sneak-peek screening of the film for the hundreds of extras and cast members, some of whom participated in the first JURASSIC PARK movie. Even after just a few weeks on Kauai, we have no doubt that if dinosaurs were once again to roam the earth, surely they would walk here! 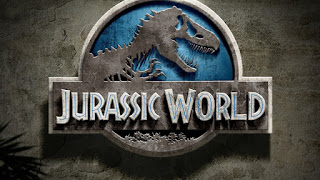 Posted by John C. Tibbetts at 2:11 PM No comments: