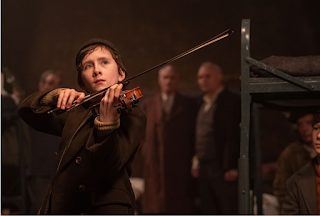 This is only one among many wonderful set pieces of the film. There is an impromptu violin duo of Paganini’s music between David and another boy while huddling in a London bomb shelter. In another scene, David stands alone in long shot performing his Song of Names in a Triblinka memorial site. And there’s the key sequence of the film, when David first visits a London Jewish community and hears the Rabbi chanting the music and the names of his own family, victims of Treblinka. The collective impact of these musics and these names is overwhelming.
Posted by John C. Tibbetts at 5:00 AM