Disturbing and fascinating, sometimes horrifying and unpleasant, Darren Aronofsky in MOTHER once again proves himself a master of surreal storytelling.

Bracketing the film are a succession of images: a face consumed by flames; a sparkling gem placed in a holder; a ramshackle house stirring to new life; a woman awakening and calling for her husband. . . Then a series of unfortunate events ensues, culminating in a kind of nasty home invasion of unwelcome guests. A fire engulfs everything. The cycle begins again. . . .

What is MOTHER about? Part One: It’s about newlywed Jennifer Lawrence’s fierce attempts to renovate a home for herself and her writer husband (Javier Bardem). While she plasters the walls and cleans the floors, he’s sitting at his desk before a blank sheet of paper nursing a creative funk. But when a strange, sinister family comes to call (chillingly portrayed by Ed Harris and a most unpleasant Michelle Pfeiffer), he lets them in. Against her will, he allows them to take over the house. Chaos erupts and the horde of strangers trash the house. There’s a killing. Finally, the invaders leave. Reunited now with her husband, the wife discovers she is pregnant.

What is MOTHER also about? Part Two: The second half shifts focus. Her husband is a raging egomaniac. He values nothing unless it feeds his drive to write new poetry. And so, while the wife awaits the birth of the baby, the writer welcomes another home invasion. This time, it’s crowd of hero-worshipers, come to his door to celebrate his new book. Their quiet adoration turns into a candle-lit religious ceremony, then devolves into mob anarchy and violence, and soon turns the house is utter chaos. During all this, the baby arrives. The mother fiercely refuses to give it over to the husband. But he wants to show it off to the crowd. He wrests it out of her arms and bears it high above the crowd. They worship it; and then they tear it to pieces. Enraged and quite out of her head, the mother sets fire to the house. The husband cradles her burnt body, whispering that the inspiration the mother gives him can never be enough. He adds, that’s the essence of the creative urge. He must take and take from her and she must give and give—even her beating heart which he tears from her chest. He wrests it from her body and crushes it in his hands until a hard, diamond-like gem is produced. Amidst the flames engulfing her body, he carefully places it in a cup.

We’re back where we started. And, after the house comes back to life, the cycle begins anew. A strange woman awakes and calls for her husband. . .

In the first half, seldom does a film concentrate more relentlessly on a single character than MOTHER does on Jennifer Lawrence. The camera holds her in a tight closeup, following her rambles around the house, recording her every reaction to events, registering her every psychological anxiety and fear. Through her eyes, we learn that the house is a living thing, with walls that dissolve into fetus shapes, drains and holes that are like wounds that bleed, and a basement that gives birth to mysterious tunnels. In this regard, the first half of the film owes a lot to that other masterpiece of psychological disintegration, Roman Polansky’s Repulsion.

On the other hand, as the film continues into the second half, we realize that her deterioration, in a way, is the psychic consequences of feeding her husband’s writer’s block. And when the second home invasion arrives, he’s fairly reveling in their adoration and anarchic energy. It’s as if he swells and grows, his mighty ego fair to bursting. The artist as selfish monster, demon lover. And here, we may speculate that MOTHER is about the relationship between star Jennifer Lawrence and director Aronofsky. It’s no longer a secret but now open and public. Thus, we wonder if the abuse that is visited upon Lawrence’s character by her selfishly egomaniacal husband might somehow draw from the dynamic between actress and director.

Our fascination in the first half turns into repulsion in the second. While Aronofsky teases and tantalizes and dreams in the first, he batters and overwhelms us in the brutality of the second. Some of us will come away, feeling as brutalized as the character of the wife. Others might stay, wondering if there will be a third part of the ongoing cycle of fire and destruction.
Posted by John C. Tibbetts at 11:25 AM No comments: 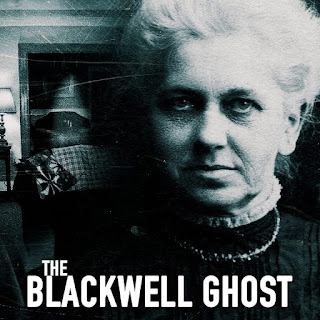 THE BLACKWELL GHOST delivers the best scare I’ve had in a long time.

It is a perfect demonstration of those occasional delights (in this case, scares) you sometimes encounter upon coming across a film with absolutely no prior knowledge of it. I was absently cruising Amazon Prime late one night when I came across this title. It was only 59 minutes, so despite the hour I impulsively gave it a look. It was billed as a documentary about a ghost hunter. Ordinarily I find things like this laughably absurd, because in spite of all the technology employed no ghosts ever have the courtesy to present themselves.

But here, although no spectral figures materialized, I was left at the end with one of the most hair-raising shocks I have ever suffered.

Since then, I’ve told many friends about this, but cautioned them: Watch the film first, and only after that check out its backstory.

At any rate, at the outset, THE BLACKWELL GHOST, seemed different from your ordinary store-bought paranormal investigation. This ghost hunter was no professional camera geek but merely a back-porch hack making a living by making clunky “zombie” video quickies. On a whim, he launched a one-man investigation into a purportedly haunted house in a Pennsylvanian suburban town. His inquiry picks up steam when he is invited by the occupant to visit the house and hear its story: It is a tale of thumps and bumps in the night, of doors and lights that click on and off, and, most intriguing, of a cellar with an underground well into which a previous occupant, one “Ruth Blackwell,” had dispatched the dismembered bodies of her victims.

Some research at the local library reveals that in 1941 a woman named Ruth Blackwell had indeed lived in that house and murdered and dismembered several victims and discarded them into the well in the cellar. A photo exists of Ruth, a decidedly sinister character about which nothing more is known.

The rest of THE BLACKWELL GHOST is an on-camera, first-person documentary that depicts our investigator and his wife spending three days and nights in the house. Armed with some makeshift cameras and microphones, they settle in. The first night is disappointingly bereft of spooks. The second night brings on a few strange sounds but little else. Determined to leave after one more night, they encounter during a thunderstorm a whole new battery of incidents that leaves them fleeing the house.

And left me shaken, baffled, and, above all, curious about what I had just seen.

Let me isolate one incident from the events depicted: One strategy our ghost hunter employs to trap any trickster ghosts is to place a soccer-ball-sized sphere on a table in the living room, an open invitation for a ghost to move it. Later, during that last, terrible night, alarmed by the noises downstairs and the appearance of veils of smoke triggering the smoke alarm, he ventures below. He discovers that every faucet in the house is on and that the power has been switched off. Down in the cellar, with only weak illumination from his light stand, he gropes for the breaker switch. No luck. But he can’t help noticing one new detail about the cellar: The sphere that had been placed on a table upstairs is now sitting atop the heavy grate covering the well opening.

Hours later he and his wife quit the house.

The film ends with no explanation or end credits. We have yet to learn the identity of our intrepid investigator.

Okay. That’s it. I must admit I swallowed this whole thing, hook, line, and cellar. All the paranormal, found-footage movies out there notwithstanding, I bought it all.

I later learned that THE BLACKWELL GHOST is, in all probability, a hoax of exceedingly clever achievement. No such house, no Ruth Blackwell, no account of the crimes exist. The clumsiness of its narrative structure, its amateurish execution, the goofy tactics of its unnamed narrator, the failure to deliver any spooks of substance—all contribute to its apparent veracity. You can go back and review it and detect all kinds of telltale evidence to the contrary—where is the camera for that scene, why are the characters not named, why are there no credits, for example. . . ? We don’t even know who the filmmaker is. Yet, the very fragmentariness of it all, as if a length of video film had been ripped off a larger reel and hastily abandoned, contributes to it strangeness. Calculation, if it is here, is superbly planned and executed in a manner that conceals its artistry.

I am left with that glimpse in the flickering light of the cellar of that blasted ball sitting on top of the well grate. What it signified, what it suggests, is with me still.
Posted by John C. Tibbetts at 9:09 AM 19 comments: