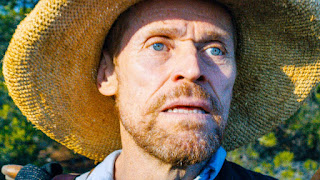 The sunflowers are withered.

It’s not that there’s anything particularly wrong with this poetically sensitive depiction of the last three years in the life of the Dutch painter, Vincent Van Gogh. These were years spent in around Arles, years of a chaotic chain of circumstances—corrosive relations with Paul Gauguin, pleas of help to brother Theo, incarcerations in hospitals and asylums—that miraculously produced the masterpieces we now know and celebrate. AT ETERNITY’S GATE, I must admit, surely benefits from lushly photographed landscapes and an outstanding performance marked by Willem Dafoe’s trademark intensity. It’s just... well, I’m probably the one at fault, for expecting a more insightful and interpretive conjoining of image and music from painter-filmmaker Julian Schnabel.

Instead, Schnabel trots out the Usual Suspects about the troubled painter’s mental and physical turmoil—the visions, the erratic emotional temper, the restlessness that damaged friendships and home life, the stabbing painterly “performances” at the easy... And he serves them up with pertinent, brief excerpts from the painter’s letters. But it lacks context for all these things. The painter’s words, about his God and about his work, about his fellow painters, are shorn of the needed nuances of time and circumstance that they deserve. Please note: Van Gogh was an extremely gifted and expressive writer, as measured and steady in his letters as he was impulsive and reckless in his behavior. But eviscerated and clipped as are his words here, his thoughts seem merely artificial and cliched. He is ill-served here. Consult his letters. See for yourself.

And there are those annoying, wordless, interpolated passages where Schnabel’s camera follows Van Gogh on his interminable ramblings across the countryside. We see his feet, we see his face limned against the sky, we see through his eyes the landscape ahead... Walking, always walking. On and on. A lot of screen time might have been better served than this preoccupation with walking, climbing, scrambling. Worse, during these walking sequences, there’s an annoying solo piano on the soundtrack, lamely hammering away at repeated chords, likewise, on and on...

But there is a final irony here—one that I assume is intended by director Schnabel. He defies our expectations of filling the screen with Vincent’s signature images of blazing-yellow sunflowers. Instead, all we get is a field full of desiccated blooms and stalks, pitiful brown remnants of a once proud glory. But that is fine. That is fine with me. This bravely, rudely works against our expectations. It’s the sort of debunking touch that we had found and welcomed so frequently in an earlier Van Gogh biopic, one that I much prefer—Vincent and Theo, by Robert Altman.

Posted by John C. Tibbetts at 3:30 PM No comments: 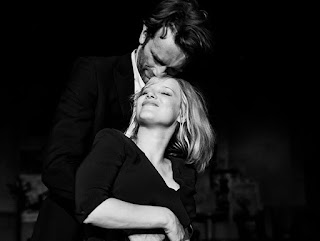 Directed by Pawel Pawlikowski and starring Joanna Kulig as Zula and Tomasz Kot as Victor.

SONGS OF THE EARTH?

COLD WAR is a story of two lovers who meet, separate, reunite, stray apart again... over fifteen years, from 1949 to 1964... and then finally march steadily toward the fate that has always awaited them. It’s a great film.

Warsaw, 1949. Zula is a fresh-faced young Polish girl who auditions for the famed Mazurek Ensemble of singers and dancers. Like them, she is young, relatively untutored, from farm and the country. They come from the earth, they perform music of the earth, they bring their quirky, plaintive folk songs to audiences across Poland. But it’s not quite as simply stated as that: Zula auditions a song she calls “Two Hearts.” Is it a Polish folk song? Not really: She heard it in a movie soundtrack. And that’s not the first musical irony of many to come. Attracted to her is Victor Tomasz, the conductor of the ensemble. On his off hours he is performing--not a Polish folks song... no—he’s belting out a more sophisticated Polish tune, Chopin’s “Fantasy Impromptu.”

Are you getting the sense these two performers are slightly out of kilter with the program?

Soon, Zula and Victor fall in love. They and their ensemble quickly come under the Communist agenda promoting Joseph Stalin’s so-called People’s Music. And yes, now dressed in beautifully tailored peasant costumes, here they are, on stage in a crowded opera house, performing a gruesome but festive “Stalin Cantata” in front of a huge curtain bearing Uncle Joe’s fiercely-mustached face. Music of the earth is ground down under the dictator’s heel. The audience dutifully applauds. Touring takes the Mazurek Ensemble to Berlin and East Germany. Yugoslavia.

The lovers split when Victor escapes to Paris. He performs in a piano bar. Years pass. Now she’s also in Paris but married with a son. She’s gaining fame as a cabaret singer. (I might add that more and more she looks like Monica Vitti, which is fine with me!) Listen closely, and you’ll hear underneath the sultry smoke and slow, slightly dissonant harmonies that same song she same years ago, “Two Hearts.”

Regarded as a political dissident, Victor is dragged out of Paris by the Polish police. A jail cell waits for him.

And so it goes. More years pass. Crossing borders. She returns to Poland and performs a bongo-band version of “Two Hearts.” He follows. They try to reunite, but it hasn’t worked before, but maybe, just maybe, it’s going to work now?

COLD WAR is a history of music as much as of the political fortunes of two lovers. Of, I should say, what happens to music... as it springs from the rough, frayed hearts of the peasants, slumps to political agendas, transmutes into the discords of cabaret and blues, and erupts to Zula’s frenzied dance to “Rock Around the Clock.”

COLD WAR has a measured, rather stolid pacing, moving along in discrete chunks of story fragments. It frequently leaves gaps that allow us to fill in the story. Was it Miles Davis who once said, “It’s not the notes you play, but the notes you don’t play? COLD WAR is like that.

It’ll be a miracle if this Polish-French-British finds a home in local theaters. Check Amazon. But know that elsewhere, it’s garnered a fair share of international awards. 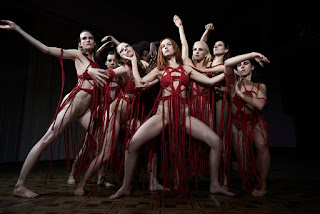